Sisi, the New Pharaoh or the New Nasser

While the Syrian fiasco continues and the peace fever overtakes the White House, significant events are happening in Egypt.

Egypt still remains the key to the Arab world. It is the cultural center and most powerful despite  its economic woes and continuing struggle between the Muslim Brotherhood and the government.

General Abdel Fattah Al-Sisi, the interim and possibly president for life, has banned the Muslim Brotherhood and is cracking down on the media vestiges of the MB. This has brought forth the usual conventional wisdom…that President  Nasser banned it and it returned stronger than ever. But the  reasons for that are rooted in the jousting for power after Nasser died.

After a brief  alliance with the Brotherhood, Nasser turned violently against them. He took extreme measures to ensure the MB was not a threat to him . He hanged Sayyid al Qutb, their philosophical mentor  and demi-God to the Muslim fanatics around the world. He also ridiculed them very effectively. In one famous incident, Nasser  made a speech in which he recalled his conversation with a leading cleric. The cleric was demanding that Nasser decree that all women must wear the hijab       ( head scarf).

Nasser said he recalled that the cleric’s daughter did not wear a hijab and continued “If you cannot make your own daughter wear the hijab, how can I make  all the woman of Egypt wear it?”

While Nasser crushed the MB , his predecessor Anwar al-Sadat  effectively and ironically brought them back into the political arena.

After Nasser died, there was a power struggle within the “Free Officers” cabal that brought Nasser to power. Sadat was faced with strong opposition from the Left wing of the officers leadership so he turned to the Muslim Brotherhood for support. Ultimately, like Nasser, he turned against them, but by then they had revived and Sadat paid the price.

No Arab leader of recent times has had the following of  Nasser. From all over the Arab world when he spoke all ears were on the transistors, soaking up every word. He turned Egyptians into Arabs and formulated the political process that brought Egypt to the fore of the his three spheres, Islam, the Arab world , and Africa. Despite his many mistakes and costing Egypt tremendous defeats in Yemen and against Israel in 1967, he remains a venerated figure in the Arab world, from Iraq to Mauretania.

Al-Sisi comparisons with Nasser have largely been seen and felt  among the anti-muslim brothers crowds across Egypt. The way Sisi is being celebrated as the new Nasser, whether in the traditional media or social media, is seen by some analysts  as a way to legitimize him as the next president.  On his side, General Al-Sisi seems to welcome such support and does not hesitate to emulate Nasser. This was symbolically and very publicly made clear by his  visit today to the grave of Nasser to mark the latter’s death anniversary.

By outlawing the MB,  Al-Sisi follows in the footsteps of Nasser. Had not Sadat brought the MB back into the political arena, most likely they would have remained on the periphery of Egyptian politics despite the religious conservatism of the Egyptian society.

There is no doubt that the MB followers can continue to create problems for the Egyptian government but it should also be remembered that  following the assassination of Sadat in 1981, the expected Islamist uprising did not materialize.  In the early 1990’s , various Islamist groups took  up arms against Mubarak only to be decisively defeated in a low intensity conflict. Their leaders wound up in prison singing the praises of the Mubarak government.

In following in the footsteps of Nasser, General Al-Sisi is playing a smart and emotional game in a region where emotionalism and history often counts more than accomplishments and the future.

Some seasoned observers of Egypt lamented that the army take over of Egypt and ouster of the incompetent Morsi government was a grave mistake. 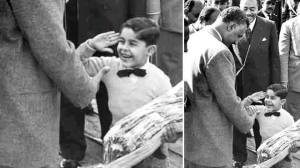 A photo that social media users in Egypt claim it shows Sisi as a child with Nasser. (Photo courtesy: Facebook)

I personally don’t think so. It is simply another indicator that the volatility of Arab politics and the lack of a civil society will remain obstacles to Arab democracy. Until there is  destruction  of Islamism and the establishment of a civil society functioning to balance the power of tribalism, clans, and warlordism, Arab springs will turn to Arab winters.

Retired artillery colonel, many years in a number of positions in the Arab world. Graduate of the US Military Academy and the American University of Beirut. MA in Arab studies from the American University in Beirut along with 18 years as Middle East Seminar Director at the JFK Special Warfare Center and School, Served in Vietnam with 1st Inf Division, Assignments in Lebanon, Jordan and Egypt, plus service with Trucial Oman Scouts in the Persian Gulf. Traveled to every Arab country on the map including Iraq, Syria, Kuwait, Qatar, Saudi Arabia, Tunisia, Algeria and Morocco.
View all posts by Tex →
This entry was posted in Arab Culture, Arab Military, Egypt, Islam, Middle East Politics, Uncategorized and tagged Al-Sisi, Egypt, muslim brotherhood, Muslim Brothers, Nasser, Sadat. Bookmark the permalink.