Telling Enemies from Friends in the Arab World Insurgencies, A Story

Why its not easy to define “friends and enemies” in the Arab world.

In writing about the Arab world, the black and white is rarely there. Things are never clear-cut. I recall one particular incident that reminds me of this important lesson. Back in 1970 when I was the assistant Army attaché, and acting dense Attaché. Back then I had a Palestinian driver called Omar. He was a friendly fellow who liked to talk a lot and often helped me practice my Arabic. Actually his Palestinian Arabic helped me balance my Bedouin Arabic dialect that I was picking up from my friends in the Jordanian army especially those of the armored car regiment and the armored units.

Omar had been the driver for the military attaches for a number of years. In addition to driving, he was also a “go for” guy.  When the periodic firefights broke out in the streets of Amman, which was almost every day getting out and around from the Embassy was a dicey affair, especially since the embassy at that time was in Jebel Luweibdeh, a middle Class Palestinian neighborhood.

So very often we, the guys in the Defense Attaché office sent Omar out to bring in our favorite Palestinian dish Mousahkan, a great chicken dish with sumac, many kinds of spices, onions, Pine nuts on Pita bread, with humus of course. Strangely enough with all the Palestinians in this country it is hard to find in any   Arab restaurant.

As the war between the Palestinians (PLO) and East bank Jordanians heated up my job was get out and. look around and try to figure out what was going on. On one  such trip, Omar was driving  me to Ajlun, a northern Jordanian city and we had to pass through a very large Palestinian refugee Camp,  called Baqa’a . As we neared the center of the huge sprawling camp, Omar suddenly did a movie type turn around, dust flying and tires screeching,. As I recovered from my surprise, as I was half asleep, I asked Omar what the hell was going on. He replied that he has spotted a Palestinian Front for Liberation of Palestine flag at a roadblock up ahead. As I looked back I indeed spotted their flag and several of their armed people around it.

Omar had saved me from at least a beating and captivity or worse. They were the group that touched off the civil war with they hi-jacked  three Western aircraft and made them land on a desert airstrip. I was of course immensely grateful.

Several times during this era of Jordanian- Palestinian conflict, Omar with his knowledge of the Amman urban terrain, and who controlled the immediate area….i.e, which Palestinian groups, (there were many), kept me from harm’s way.

Then after being absent a few days, Omar reappeared. His face was swollen, eyes blackened, his whole demeanor was one of fear. He had a familiar story. The Palestinian Democratic Front for the Liberation of Palestine had taken him.  PDFLP was another militant group. They beat the hell out of him. He never explained why they let him go.

Yasir Arafat ldr of the PLO

Shortly thereafter the Jordanian Army made an all-out attack on the Palestinian PLO and much of Amman was shrouded in smoke and fire..

As the embassy became surrounded by a number of Palestinian guerilla groups, the locals were released and not until the Jordanian Army cleared Amman, did I hear about Omar again.

The embassy security people came to see me and showed me a scrap of paper. On the paper was a crude drawing of my office and on it was a picture of the location of the safes, the chairs, and my desk.

The security people told me that Omar had made the drawing, and that the Jordanian army had found it when they overran a Fatah headquarters. Fatah was the main PLO Fedayeen group. Taken by the Jordanian Security people, Omar had been beaten up once again, this time by the Jordanians. Omar admitted he had been released by the PDFLP after the Fatah people informed them (the PDFLP) that he was working for Fatah. Obviously that was why they let him go and just as obviously Fatah wanted him to go back to work for us. 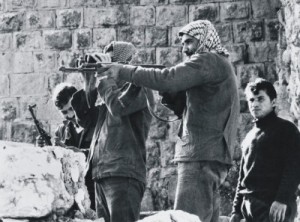 A month went by. One morning, as I came out of my home, there was Omar literally on his knees, thin as a reed from his time in a Jordanian prison, and he began begging me for his job back. He told me he lived in a refugee camp, as I knew he had, and doing the drawing was the only way to keep himself alive and take care of his family of a wife and seven or eight kids.  He was crying with tears rolling down his cheeks. I was moved and said I would talk to the security people.  I did, and of course they said I was nuts, and a soft touch for a sob story, and no way would he be rehired.

I never saw Omar again, but I often wondered what happened to him. No one I asked, even from his refugee camp, seemed to know or would admit it.

I think of this story when I listen to the “experts” talk about insurgent warfare. Who are the good guys and who are the bad ones.  The various theories of “winning hearts and minds,” and fighting an insurgent war are well intentioned, I suppose, but the great majority is nonsense.

This story is the epitome of sectarian, religious, and tribal warfare. It is alien to the Western mind. So it is in Syria today where the Western media has so quickly defined the good, the bad, and the ugly.