What Brings So Many Western Recruits to the ISIS?

An Iraqi friend of mine had a conversation with me about the appeal of the ISIS to Muslim youth living in the West. The all too often heard argument is that some form of hopelessness possesses Western Muslim communities.  Prejudice, joblessness, poverty, the allure of adventure, loot and women, plus some smattering of an Islamic dream of a caliphate are among the reasons most advanced as drawing European and some Americans to the cause of the Da’esh ( ISIS).

The point she made was that many of these recruits, in fact almost all, are second or third generation Muslims living in Europe.  The argument is that the horror of Arab world political systems or dyfunctionality of the society, one that their families fled from, has not been imparted to the second or third generation.  They begin to have a dreamy, idealized concept of the “old country” and attribute all its ills to the ever-present scapegoat of Western imperialism or Zionism.  This is  not just an Arab/Islamist belief but rather one prevalent within intellectual and academic circles in the West.  It is a half truth perpetuated in the centers of Islamic and Arab learning, using Western sources, and endlessly repeated even as its validity and usefulness has precipitously declined.

More importantly, these recruits for  ISIS coming from Europe have very little knowledge of Islam as a religion.  As my friend said, “They easily trust anyone wearing a turban or having a long beard even though he is feeding them vitriol posing as Islamic doctrine.” Many have only a cursory knowledge of the Qur’an since most are unable to read it and none able to interpret its deeper meanings.  She went on the say, “If I were a Muslim who was born here and feels nostalgic for my parents’ homeland and culture, and never had the opportunity to properly learn about my culture, I would be vulnerable to any radical narrative fed to me by a  Salafi cleric or someone cleverly disguised as a cleric.”

There is a cottage industry on the “terrorist mind,” with seemingly a book a day emerging on the subject.  Some encompass the argument that there is minimal or no difference  between Islam and Islamism (political Islam).  Another argument, apparently very popular  in the U.S. administration, is that these terrorists are not “real Muslims.”  There are many gradations in between these arguments, including a very frequent one found in the liberal press that enforcing  national law in Muslim neighborhoods increases radical recruitment.  The obvious result of this attitude, when politicians are intimidated by political correctness, is to create “no go” zones where local Islamist thugs create their own  law. When commentators referred to the fact that French and Belgian Islamist terrorists were being sheltered by sympathizers, they were right to an obvious degree, but there is also a strong element of fear.  Who would protect potential informers when the word got out? Certainly not an ineffective police force, ill-equipped culturally and in training to deal with zealous and determined Islamist terrorists.  They are also hamstrung by laws based on a civilized, law abiding and soft society.  This is a normal consequence of Western society allowing “no go” zones to develop. There are many no go zones in France, Belgium and other European countries, but not only in Europe.

I remember talking to Turkish policemen in Adana Turkey in early 2009.  They said they did not dare enter into the Kurdish neighborhoods of Adana which at that time had a Kurdish population of almost 50%.  Ultimately the “no go” zones spin out of control.  The people who suffer the most are decent people who live within this urban jungle and do not have the wherewithal to escape.  So it is in the Muslim enclaves of Europe.  No doubt there are considerable numbers of Muslims who do not want to assimilate or integrate.  They view Western society  as effete and weak and are contemptuous of its culture, religion (or lack thereof),  and its way of  life.  These people should not be allowed to become the voice of the Muslim community.  An example of this is the Council on American Islamic Relations (CAIR) which is basically a front group for Muslim Brotherhood sympathizers.  It seems that these people are always on the short list for invitations to the White House,  with the Bush administration, and especially under the Obama administration.  In fact law abiding Muslims, who basically want to live their lives as do most ordinary citizens, avoiding religious confrontation, have no clear voice to oppose the CAIR and other similar organizations.  These more radical organizations seem to have deep funding and media support (as well as ironically more “liberal” elements of our society).  From where does the financial support come?

Unfortunately, the alternative to a healthy practice of zero tolerance for Islamist rules or the Sharia becoming law in an Islamic community is the Algerian method. The Algerian government won the urban war with Islamist terrorists by out terrorizing the terrorists.  In other words the people became more fearful of the government security forces than the Islamist terrorists.  The famous movie, “Battle of Algiers” is an interesting but not entirely accurate depiction of the earlier French war on the nationalist  Algerian terrorists. Actually the draconian French methods, depicted at the end of the film, were beginning to pay off when  President De Gaulle decided the war was ultimately not winnable and initiated the  departure of French forces from Algeria.

Despite the sonorous sound of the “hearts and minds” theme of  Western anti-insurgent warfare (largely misunderstood), fear ultimately prevails. Who does the population fear the most?  Who can do the most harm?  Who can protect them?  The answer is not a government security force that prevails by day but disappears at night.

A Moroccan student at a North Carolina university wrote a term paper that described the attitude of Muslims at a Raleigh  mosque.  Not surprisingly, most of the Muslims questioned refused to respond to the questionnaire as this was only about a year after 9/11. Of those who did respond to the questions, the surprising result was that second generation  Muslims  had more favorable views of Osama Bin Laden  than their parents.

In light of the conversation with my Iraqi friend, her observations make sense.  The older generation still has memories of the economic, political, or religious sectarian problems that drove them to leave their countries of origin.  The second and third generations do not.  This was the story of the Harkies, a term applied to the Algerians who had sided with and fought for the French in the Algerian”war of independence,” which was in many ways more of a civil war as the number of Algerians who  sided with the French was considerable.  The French basically disarmed the loyal (to the French) Algerians and left them to their fate at the hands of the FLN, the  National Liberation Front. Many thousands  and their families were slaughtered by the Algerian nationalists.  The lucky ones saved their lives by leaving Algeria and making it to France. Their lives there were not idyllic, living in a French society not welcoming to Algerians who were seen as second class citizens. 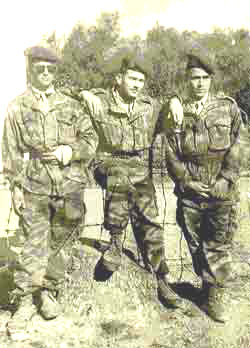 Algerians who fought for France and paid a steep price

It is, in many cases, the sons and grandsons of those Harkies who are involved in terrorism today.  The horror that had awaited their families if they had remained in Algeria was forgotten, erased  by Salafi clerics who used free speech and the pulpit of the Mosque to denigrate European civilization and spew hatred, reinforced by a less than welcoming French population.

May 1989, Marseilles, France — Muslim immigration in the port city of Marseille.  Muslim men at pray on Bon Pasteur Street.

So we have a tragic story of a Muslim population fleeing from a dysfunctional culture and society, or the lack of economic opportunity, and unfortunately being allowed (or forced by a well-funded clerical and political elite) to re-invent a mirror image of that same environment in their neighborhoods in Europe.  In this they are being aided and abetted by an ignorant and/or arrogant elitist intellectual segment of Western society so obsessed with contempt for, or distrust of, their own people that they retreat to their guarded communities and campuses and refuse to face reality.  This is where the term “political correctness” fails to portray the seriousness of the situation.  It is truly Orwellian that,  while Western governments seem determined to root out any semblance of adherence to  Christian traditions, they seek to impose “accommodation” to Islamist laws that violate their secular values, as well as undercut the attempts of Islamic reformers to combat the  dystopian version of Islam that controls the market place of ideas.