Taarof and The Adventures Haji Baba of Ispahan

Iranians  are a complex people, an imaginative people and a difficult people to deal with  because they seldom if ever say what they mean or mean what they say, Their complicated process of etiquette  is near unfathomable to Westerners, for example, ,  within the context of politeness  one invites people they detest to their homes. But they  know that the tone and manner in which they say it will be usually detected by the other Iranian. and will be graciously declined.  But this subtle communicative style is unlikely to be understood  by unwary Westerner, In fact even within the Middle East the Arabs and Turks, in their ultra  stereotypical way, always refer to the Persians as a deceptive and disingenuous people. The term for this form of social intercourse is called “taarof.”

“The prevalence of taarof often gives rise to distinctly Iranian styles of negotiation. For example, a worker negotiating a salary might begin with a eulogy of the employer, followed by a lengthy bargaining session consisting entirely of indirect, polite language – both parties are expected to understand the implied topic of discussion. Likewise, a shopkeeper may initially refuse to quote a price for an item, suggesting that it is worthless (“ghaabel nadaareh”). Taarof obliges the customer to insist on paying, possibly several times (three times), before a shopkeeper finally quotes a price and real negotiation can begin.” 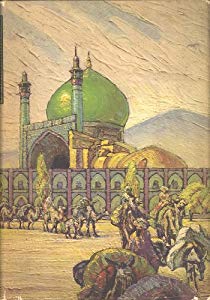 This above  is a quote from wikistat which, however,  recoils  from  giving the full importance of this Iranian  cultural trait. A more readable, painfully truthful  and enjoyable, but alas, politically incorrect, source on Iranian culture is the 1824 book by Britisher James Morier. The Adventures of Haji Baba of Ispahan ( a book suggested to me by an Iraqi friend). It details the inbred traits of indirection, dissimulation,  prevarication, and obfuscation which characterizes the life of Iranians then and now.

Haji Baba is a rogue, with his morals sitting easily about him, but not a malicious one. with as much wit and cunning to enable him to dupe others, and as much vanity as to afford him them the perpetual means of retaliation, a sparrow hawk, who, while he floats through the air in quest of smaller game, is perpetually exposed to be pounced on by stronger bird of prey. He interests and amuses us, while neither deserving or expecting serious regard or esteem he will be  always  be the “knave  who is our very good friend.” so wrote Sir Walter Scott in the preface to the book.

To  some extent the taarof syndrome is reinforced by the the Shi’a cultural attribute of “taqiya’ (dissimulation) acquired over the centuries wherein  a Shi’a can deny his religion to protect his life from Sunni persecution. The symbiosis of these cultural attributes have become to some extent become more pronounced by the imposition of the Islamist regime. As an article by PBS reporter  in 2011  captured it, the Iranians  live in a schizophrenic  (my word) society made much more so by a largely imposed “outdoors” Islamist  way of life incompatible with their customs, meaning they live in a public world actually alien  to their manners and morals,  and therefore  try to shut it out once inside their homes.  Imagine negotiating with these masters of illusion and delusion or analyzing events and trends within the Iranian  regime.  see https://www.pbs.org/wgbh/pages/frontline/tehranbureau/2011/11/society-the-duality-of-life-in-iran.html

A really good book to read about the use and non use of language is Edward T Hall, The Silent Language. On page 18 he  has some  excellent examples of the Iranian manipulation of  language. In fact, in terms of culture, all his book are still by far the best…and readable!!!

This taarof cultural trait is one we should always keep in mind when reading articles and “think pieces” on Iran today, For instance take the recent Iraqi “protest at the Bahrani  embassy  in Baghdad , ostensibly protesting the Trump “deal of the century,” (another in the unending and always unsuccessful endeavors by each American administration to achieve an Israeli-Palestinian peace in our time,) Of course the Reuters article reported it as it was advertised, i.e. a protest at Bahrain hosting Israeli and Arab delegates to  hear out the plan. see https://www.reuters.com/article/us-israel-palestinians-plan-iraq/baghdad-protesters-take-down-bahrain-flag-over-trump-peace-conference-idUSKCN1TS359

But in reality it had nothing whatsoever to do with Israel or Palestine. It was just one of the many Iranian endeavors to pull Iraq further into the Iranian orbit.  The protestors  were simply a “mob for rent” paid for  by the Iranian security services or the Iranian Republic Guards Corps (IRGC}, The Shi’a protestors, like Iraqi Shi’a in general, do not like Palestinians who were cultivated by Saddam.When Saddam went down, the Palestinians  he imported into Iraq were evicted by Shi’a  returning to their homes. Their homes  had been confiscated by the Ba’ath regime to accommodate Palestinians.

As an aside it should be kept in mind   that the Palestine issue is largely kept alive by the Islamic regimes looking for diversions, the old bread and circuses routine to entertain restive populations. They are facilitated by  Western academics and journalists  who rarely look beyond the simplistic, and in tune with the journalistic  fashion of this era to attribute all ills to the  Israeli state.  It is instructive and ironic today that  the Erdogan regime of Turkey and the Islamist regime of Iran have become vanguards of “Palestinian rights. ” Both have long histories of conflict with the Arabs, including in more recent times, collusion with Israel to  confront  Arab threats.

Mike Doran, one of the few analysts today writing sensibly on the Iranian “crisis”  ascribed part of the Iranian stream of mosquito bite provocations to am attempt to get Trump to the negotiating table enabling them to repeat the success they had with the Joint Comprehensive Plan of Action,” the Nuclear deal” concluded in 2015.

The deal based on the shaky foundation of Iranians promises , opened the sluice gates to Iranian intervention and interference throughout the Middle East. Yet the engineers of this “deal.” John Kerry and his adoring  acolyte Ambassador William Burns, are still in the news,  lecturing and singing  the praises of the “deal.” In fact Burns wrote a book (Back Channel: A Memoir of American Diplomacy and the Case for Renewal. I dutifully read it, wincing  at his hagiographic recollections of Kerry and the “Deal.” 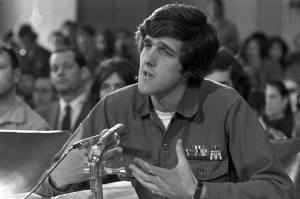 Kerry denigrating his country and its soldiers. Leopards change their spots? Check the misuse of medals and the uniform he disgraced

Yes. my opinion of Kerry is indeed prejudicial, based on his despicable conduct in promoting his  political career, rising to the top of the elitist political establishment of Washington DC by trashing American soldiers in the Vietnam war.

One of the basic truths one must keep in mind when conducting negotiations with  Iran is that there are basically three governmental entities, The Mullah religious entity, with Ayatollah Ali Khamanei in total control, the militaristic state as established by the IRGC. and finally the civil government of  President Hassan Rouhani. The  Mullah regime is deeply intertwined with the IRGC. At the bottom with very little power in affairs that are of critical importance to the State, is the civil government and its foreign ministry. Signing a deal with them is tantamount to  signing a deal with the Brookings Institute and assuming it will apply to the US government.

People in the Washington elite establishment are always impressed by the sophisticated, English speaking  front men who carry the water for despots, from Joachim  Von Ribbentrop, to Tariq Aziz, to Mohammad Jawad Zarif, the  Iranian Foreign minister, educated in the West, and like many of the “religious” figures of Iran send their pampered kids to be educated in the West. All the while exhorting the people  of Iran to guard against the evil of Westoxification.  People like Kerry assume they are just like him. In fact  Kerry had a long personal relationship with Zarif before the nuclear negotiations.  The hypocrisy of the Iranian  regime is well  exposed in this article in the Business Insider …. https://www.businessinsider.com/irans-leaders-send-their-children-to-study-in-the-west-2014-9

I have finished reading two books both of which are very informative and with excellent analysis. The Immortal. A Military History of Iran and its Armed Forces by Steven Ward and Vanguard of the Imam by Afshon Ostovar

Next blog on them. with why the Iranian regime’s hubris is its likely downfall and the problems facing the Religious-Military regime of Iran, the IRGC,  the Ikhwan of the Shi’a Persian empire. Clever, and  riding a crest of triumphs but by no means unassailable.

4 Responses to Taarof and The Adventures Haji Baba of Ispahan